What Is A Vizsla?

The Vizsla is an affectionate and friendly dog breed.

These dogs are dubbed as Velcro dogs because of their tendency to attach themselves to their owners at all times. Despite their size, they like to think of themselves as lap dogs, perching on your lap or simply just following you from room to room around the house.

Serving frequently as hunting dogs or household companions, Vizslas are highly energetic and alert, even as they are affectionate and sensitive. They are quite demonstrative in their affection, often licking the hands and face of their family. As hunting dogs, they have an excellent sense of smell and can be trained fairly easily to do their job.

The Vizsla categorized as a sporting dog by the AKC since 1960.

Despite their sweet and loving nature, Vizslas can serve as good watch dogs, given their high alertness level. They’re also good with children and other pets, making them the perfect choice for households that have kids and pets around.

The characteristics that have come to be associated with Vizslas include:

The Vizsla is said to be a breed that originated from the Magyar tribe in Hungary. Said to be one of the oldest sporting breeds with etchings showing their existence since at least the 10th century, they were originally bred by the aristocracy for hunting game birds as well as for companionship, given their affectionate personality. Speculated to be the descendants of the Transylvanian hounds and the now-extinct Turkish yellow dogs, they are directly descended from the pointers from Eastern Europe, a fact that is suggested by the breed’s name (Vizsla means Pointer in Hungarian).

Vizslas almost became extinct because of World War II. However, thanks to the efforts of Hungarians, some of these dogs were smuggled out of the country in 1945, thereby allowing the breed to continue. They were introduced to the United States in the 1950s and officially became registered in the AKC registry in 1960.

The AKC breed standard for the Vizsla is that of a medium-sized hunting dog with a regal appearance and bearing. Alert and energetic, these dogs have power and endurance when working in the field while at the same time retaining their loving and affectionate nature.

While medium-sized, their bodies are remarkably strong. They are slightly longer than they are tall and are muscular, but with a slim build.

The Vizla is well-known for their friendliness and affection toward their family. Demonstrably affectionate, they are known to lick hands and faces of even showroom judges when they are entered into shows, and they are also known to give Vizsla hugs, wherein they will put their paws around people’s necks. Perhaps or because of their affectionate nature, Vizlas are also known to suffer from separation anxiety, which is why those who can’t spend a lot of time with their dogs aren’t advised to get Vizslas.

Vizslas are quite energetic, which is why a Vizsla owner will need to make sure to exercise the dog regularly, otherwise, the pet may become destructive of property. Because they are very sensitive, they should not be treated harshly even during training, or they will become shy and withdrawn.

The Vizsla has a life expectancy of 10 years. 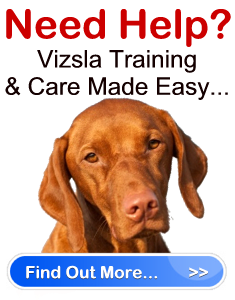